Mr McNeice is producing a two hour documentary titled Saturday Night at the Movies and The Plaza is set to play a starring role. 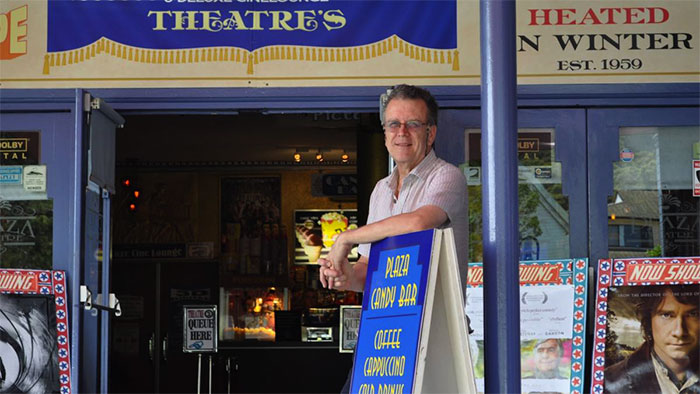 Saturday Night at the Movies is a labour of love for Mr McNeice who is a lifetime cinema lover. The documentary looks at the history of cinemas in Australia, focusing largely on the heyday of the grand picture palaces when going to the movies was an event - long before television was thought of.

The visiting producer was full of praise for David McGowan's cinema.

"What David has done here is extraordinary," Mr McNeice said.

"He has captured the glory days of cinema when presentation was paramount for theatre goers. The dimming of the lights indicates 'showtime' - the magnificent theatrical curtains open in a grand flourish for your entree into another world."

On cue the vision begins to appear on the screen welcoming cinema lovers to the Plaza.

No white screens here as one would see when entering modern day cinema complexes.

Coupled with the old style presentation an amazing collection of statues and ornaments grace the main theatre - even a Wurlitzer organ brings back memories of the days of Noreen Hennessy playing at the famous Prince Edward Theatre in Sydney.

It's like stepping back in time when 'going to the pictures' was a very special occasion.

And adjacent is the smaller cinema 2, no expense is spared there either with similar grandeur to it's bigger brother next door.

"Like so many of us who are old enough to remember, David's passion for picture palaces, inspired by such glamorous theatres as the Regent circuit around Australia, is on show for all to see," Mr McNeice said.

Mr McNeice went on to say, "It truly is a remarkable restoration for a theatre in a small country town."

As well as filming extensively inside the cinema Mr McNeice interviewed a number of locals who remember the early days of the cinema, and of course he was particularly interested in Baz Luhrmann's family's involvement.

"We've interviewed Baz for the documentary and he spoke passionately about The Plaza," said Mr McNeice.

David McGowan has owned and operated The Plaza Cinema since 1999 and he was thrilled to share his passion for its grandeur and history with a fellow cinema buff.

"I'm delighted that Graham was able to visit The Plaza and Laurieton and to see how beautiful they both are," he said.

Saturday Night at the Movies will air on Foxtel's Classic later this year.